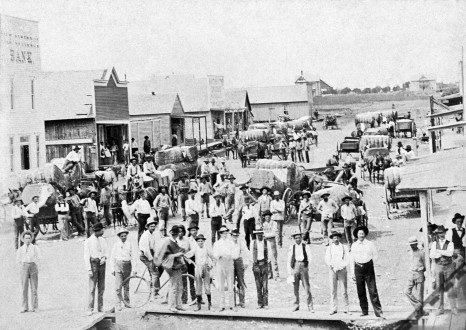 More than 125 years ago, the rival communities of Duck Creek and Embree set aside grievances and combined on neutral ground, in the new city of Garland, Texas. Today the city has grown into a globally-recognized manufacturing base for a wide spectrum of industry, but before this evolution was ever conceived a small group of soldiers’ wives set the stage for the strong will of generations of Garland citizens. As told in Richard Abshire’s “Garland: A Contemporary History,” cotton was in short supply during the Civil War.

Families were running out of resources as they watched wagons full of the cotton bales they so desperately needed be transported to battle grounds to be used as barricades. Unwilling to let the needs of their families go unmet, the group of women seized a wagon loaded with those precious bales, jumped on board, and pushed a bale to the ground to claim as their own. Either out of admiration or amusement the driver left the bale with the hijackers and continued on his way. The bravery and determination of these women perfectly embody the spirit of Garland entrepreneurs through a rich history of agriculture, industry and innovation.

Garland is a place that does whatever it takes to get the job done. From those early times when cotton production was king, through the railroad era, and on to manufacturing, the city has continued to build on the fundamental principle that a city’s economy will grow when it makes something.When the community needed basic energy services, Garland built Garland Power & Light, a city-owned and operated power company.

When cotton and onion crops could no longer sustain the local economy, the Chamber of Commerce began recruiting industry, starting with Craddock Foods and the Byer- Rolnick Hat Corporation in the thirties. Just a short decade later in 1941, Southern Aircraft, Guiberson Diesel, Continental Motors, and Luscombe Airplane Corporation came to town. Collectively those companies employed more than 5,000 people and the list of companies recruited continued to grow at a remarkable rate. Today, those companies are recognizable by their current names, General Dynamics, Raytheon, Hatco, and Kraft, among others.

Garland hosts a wealth of resources and facilities to help manufacturers seamlessly grow and adapt. When Navistar/SST outgrew its facility, the former National Oilwell facility was available to suit the expansion. Similarly, Craft Master took over a building that was formerly an abandoned Eckert’s warehouse. Companies like Valspar and Atlas Copco came to town via acquisitions of the thriving businesses of Desoto Paint and Ingersoll Rand. Known for an intense entrepreneurial spirit, Garland companies like Karlee (a Malcolm Baldrige Award winner) and Garrett Metal Detectors grew from garage shops to internationally-recognized industry leaders.

Today, Garland is home to close to 400 manufacturers thriving on a tremendous labor force, supportive city services, superior education, and the proximity to customers and suppliers. Though Garland’s cotton-picking days are a distant memory, the city still believes that the economy will thrive when its businesses are making something, and Garland is making a lot. This is why, without hesitation, those who know Garland best can say, Texas is made here.