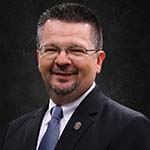 After serving three consecutive terms as District 7 Council member, Mayor Scott LeMay was elected to his first term on May 4, 2019.

Scott and his wife, Tiffany, have three daughters: Caitlyn and twins, Morgan and Reagan. Scott designs layouts for Container Stores across the nation.

Scott enjoys family time and activities. His favorite pastime is classic and antique cars and regularly frequents swap meets and auctions. But he yields to his wife’s rule that if he buys parts, they must go to a car he owns, not one he plans to own.

Scott’s neighborhood service inspired him to get involved with city government. He was appointed to the 2007 Charter Review Committee and to the Garland Plan Commission from 2007 to 2013. His goals are to increase public awareness of and participation in city government. He feels it’s his duty to encourage and foster future leaders in Garland.

2020 state of the city address